> > How is organ donation measured?

Globally organ donation rates are measured in Donors Per Million of Population (DPMP) as this takes into account changes in population over time. Leading Performer, Spain achieved 48.9 DPMP in 2019. In 2008, the government provided the funding “to establish Australia as a world leader in organ donation for transplantation”. After 11 years and about $450M injection of funds, Australia is still performing at only 50% of world leading practice.

ORGAN DONORS PER MILLION OF POPULATION

As implementation of the Reform Package was slow and ineffective, 6,637 people missed out on receiving a transplant between 2009 and 2019.

One organ donor may be able to save the lives of many recipients as multiple organs can be donated to several people.

Targeted Number of Transplants over the years are obtained from the “Reform Package” Budget presented to Cabinet in 2008.

2015 to 2019 are based on 90 transplant recipients per million population.

Since the formation of the Organ and Tissue Authority in January 2009, ShareLife Australia has used national organ registry data from ANZOD to produce a quarterly scorecard that tracks Australia’s performance in the global context. Just prior to the formation, for the 12 months ended December 2008, Australia procured 39 Transplant recipients per million population (pmp). Despite the $45,000,000.00 annual support by the Federal Government, the number of Transplant recipients for the 12 months ended December 2019 has only increased to 56.6 pmp and a decline from 61.6 pmp in December 2018. To be a “world leader” we need to be doing nearly 90 Transplant recipients pmp.

Follow the links below to view each of the scorecard reports (PDF).

The distribution of population by State in Australia varies widely. The chart below shows that the number of donors per million population are not consistent across States and Territories.  Vic has consistently performed above the national rate over the last few years while NSW has continued to perform below the national rate. Qld has moved from below to above the national rate in the previous 2 years but last year declined substantially. The smaller States and Territories also tend to experience larger variations in donors per million population measures year on year.

In 2018, were it not for the substantial increase in Vic, there would have been no increase in the national rate. 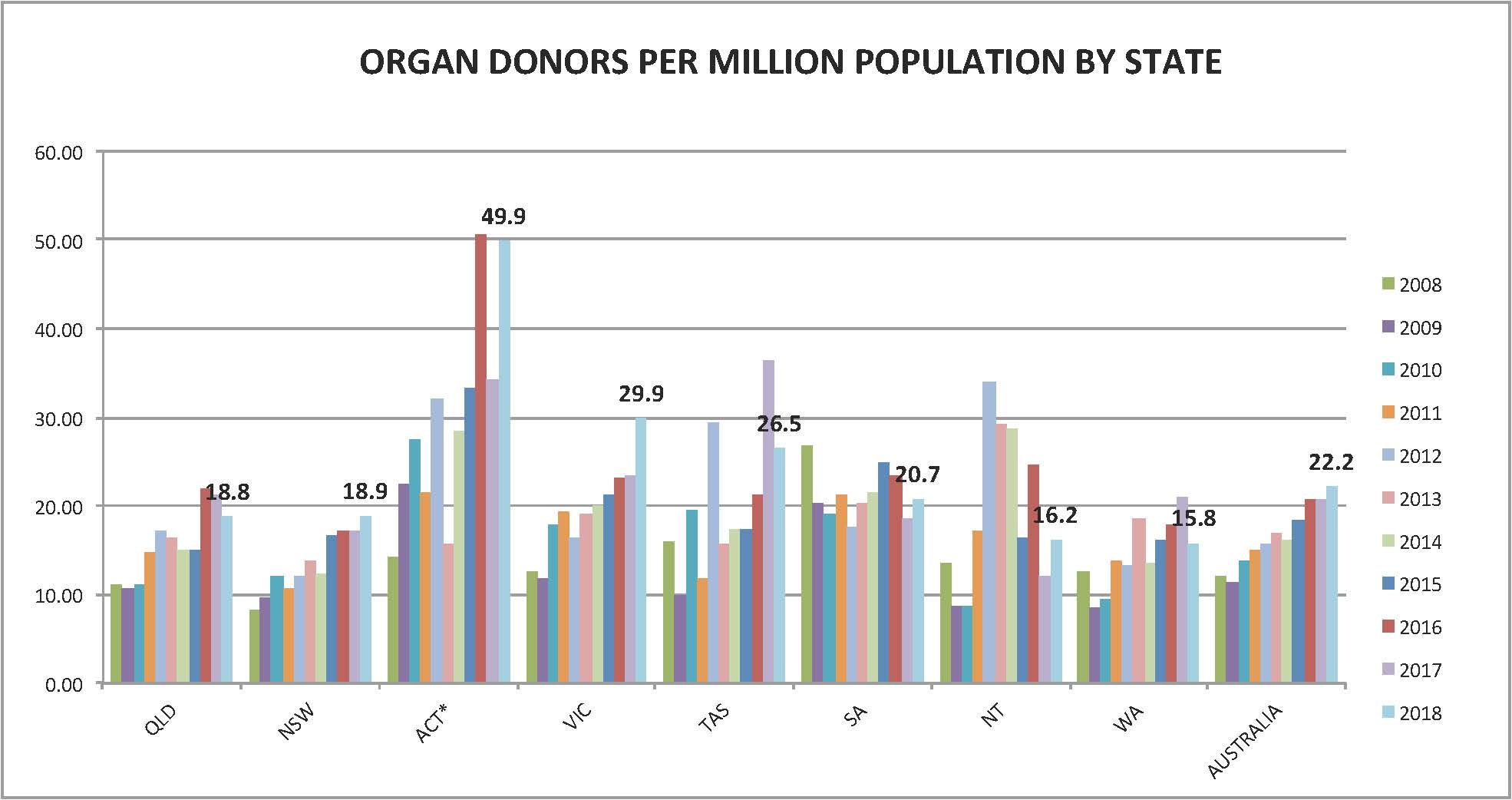 Victoria now dominates the number of deceased donors. Given the size of population in NSW, VIC and QLD, improvements in these States from a donors per million population perspective will have a substantial impact on the number of donors in Australia.

On 11/07/2018 ANZOD published the “Australian Data Tables” as part of its 2018 Annual Report. The following analysis is derived from the Tables. 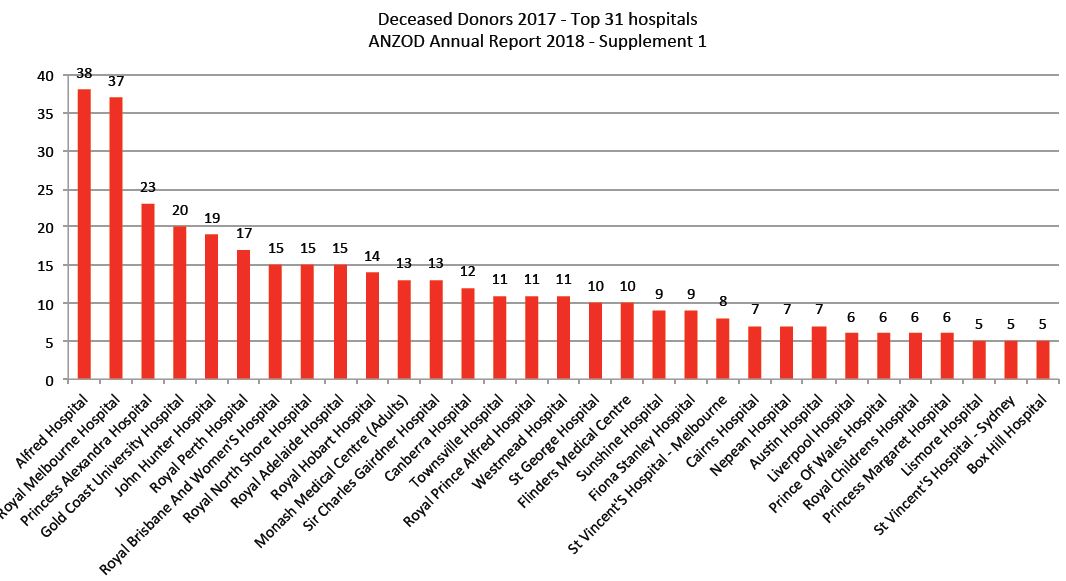 Comparing the annual average of the 7 years prior to that of the 9 years post establishment of OTA, of the top 31 hospitals in 2017, only 11 hospitals increased by more than 5 donors per annum with the size of the increase declining rapidly after these. 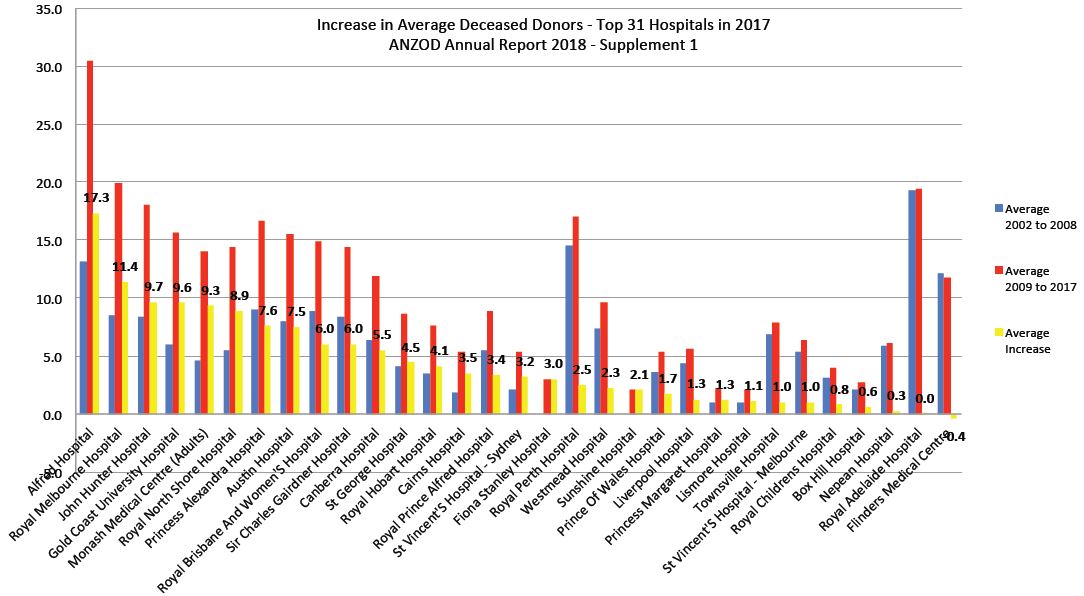