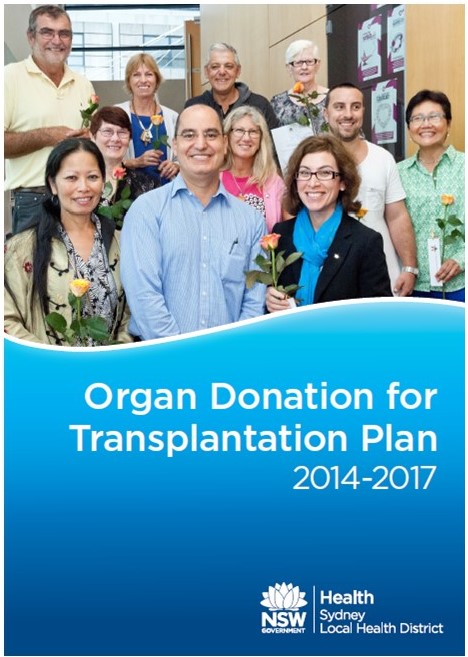 The Sydney Local Health District believes that the strategies contained in its Organ Donation for Transplantation Plan will enhance its ability to be an Australian leader in organ donation to support the world leading transplantation services that are provided by the Royal Prince Alfred Hospital. The additional resources contained in the plan will also be available to assist the NSW Organ and Tissue Donation Service and Australia in achieving its goal of NSW and Australia being world leaders in organ donation.

Good practice guidelines in the process of organ donation.

That “Spain is the leader in organ donations” has become a national and international slogan. It is quite clear that Spanish system has given ample proof of effectiveness and soundness and that Spain donation and transplantation activity has become a reference worldwide. The present project has tried to benchmark and identify those differentiating factors that justify some excellence results in the brain death donation process by the coordination team. For this project, the process of donation after brain death within the hospital setting was structured into three subprocesses:
1) Referral of the possible donor to critical care units (CCU)
2) Management of the possible donor in the CCU
3) Obtaining consent to proceed to donation.
A total of 104 hospitals participated in the study, these hospitals accounted for approximately 80% of the donors of the period studied. Finally a series of recommendations has elaborated to achieve greater effectiveness in the process of donation after brain death.

Explaining failure through success: a critical analysis of reduction in road and stroke deaths as an explanation for Australia’s low deceased organ donation rates.

During the past two decades, Australian federal and state governments have funded many initiatives to bolster organ donation. Despite large investments of time, effort and money, Australia’s deceased donation rate is in the bottom half of the Organisation for Economic Co-operation and Development countries and has only marginally increased from 11.9 donors per million people (pmp) in 1990 to 14.9 donors pmp in 2011. An often-cited explanation for this situation is that Australia’s success in increasing levels of public health and safety through reduced traffic and stroke fatalities has reduced its number of potential deceased organ donors. We refer to this as the ‘Failure Because of Success’ hypothesis. Although commonly accepted, this hypothesis is largely untested.

Conclusion: When compared with countries with the world’s highest deceased donation rates, Australia’s improvements to public health and safety through reductions in traffic and stroke fatalities were neither unique nor exemplary and do not provide an adequate explanation for its low organ donor rates.

DOPKI (Improving the Knowledge and Practices in Organ Donation) was a project funded by the European Commission under the 6th Framework Program. Its main objective was to improve knowledge and to develop an applicable methodology that could deter¬mine both the potential for organ donation and its outcome and to define the limits of the organ safety and quality.

Spanish experience as a leading country: What kind of measures were taken?

A recent call for self-sufficiency in transplantation issued by the WHO faces variable worldwide activity, in which Spain occupies a privileged position, with deceased donation rates of 33–35 per million population (pmp) and 85 transplants pmp. An evaluation of current challenges, including a decrease in deaths because of traffic accidents and cerebrovascular diseases, and a diversity of cultures in Spain, has been followed by a comprehensive strategy to increase organ availability. Actions include an earlier referral of possible donors to the transplant coordination teams, a benchmarking project to identify critical success factors in donation after brain death, new family approach and care methods, and the development of additional training courses aimed at specific groups of professionals, supported by their corresponding societies. Consensus documents to improve knowledge about safety limits for organ donation have been developed to minimize inappropriate discarding of organs. Use of organs from expanded criteria donors under an ‘old for old’ allocation policy has resulted from adaptation to the progressive decline of optimal organs. National strategic plans to deal better with organ shortage, while respecting solid ethical standards, are essential, as reflected in the WHO Guiding Principles and the Istanbul Declaration on Organ Trafficking and Transplant tourism.

The Organ Donation European Quality System (ODEQUS) is a 3-year project (from October 2010 to September 2013) co-financed by the European Agency for Health and Consumers (EAHC20091108) which aims to define a methodology to evaluate organ procurement performance at the hospital level. ODEQUS’s specific objectives are to identify quality criteria and to develop quality indicators in three types of organ donation (after brain death, after cardiac death, and living donation). Those tools will be useful for hospitals’ self-assessment as well as for developing an international auditing model. A consortium has been established involving 14 associated partners from Austria, Croatia, France, Germany, Italy, Poland, Portugal, Romania, Spain, Sweden, and the United Kingdom, as well as five collaborating partners from Greece, Hungary, Malta, Slovenia, and Turkey. The project has been established in three steps: 1) Design of a survey about the use of quality tools in a wide sample of European hospitals; 2) Development of quality criteria and quality indicators by the project experts. The main fields considered have been organizational structures, clinical procedures, and outcomes; and 3) Elaboration of an evaluation system to test the quality indicators in 11 European hospitals.

Decreased in refusals to donate in Spain despite no substantial change in the populations attitude towards donation.

Organ donation refusals have progressively decreased in Spain from 25% in 1993 to 15.2% in 2006. Our aim was to analyse whether the general population’s attitude towards donation in Spain had changed substantially during this period of time. A survey was conducted among a representative sample of the population at three different periods, in 1993 (n=1,288), 1999 (n=990) and 2006 (n=1,126), using a specifically designed questionnaire. No significant changes were observed regarding the population’s attitude towards donation of their own organs. Whereas in 1993, 64.5% were willing to become a donor or had a donor card, the corresponding values were 63.9% and 66.5% in 1999 and 2006, respectively. Although there was a significant increase in those who had spoken about donation within the family circle (49.9% in 1999 vs. 57.4% in 2006, p<0.05), there was no significant increase in the degree to which people had communicated their wishes regarding donation (41% vs. 40.7%). during thirteen-year period in spain there have been no substantial changes in the population’s general attitude toward donation. this also applies to the amount of communication on that attitude. an improvement in the technique for approaching the relatives may have been decisive for the observed decrease in the rate of>

Brain death (BD) is not a stable, objective condition; in fact, it strongly depends on early intensive treatment before death, brain stem reflex testing, and intensive care unit (ICU) physician attitudes. Consequently, unpredictable “silent” BDs due to inadequate treatment or omitted declaration may affect potential organ donations. Several lines of evidence suggest that 55% to 65% of all deaths among patients with acute cerebral lesions (DACL) in the ICU may become brain deaths. Since DACL are easily measurable, deviations from the expected ratio of declarations will disclose “silent” BDs. Results from the National Registry of DACL in ICU settings have confirmed that BD declarations are consistently fewer than the number expected in Italy, particularly in regions where organ donation rates are low. Only 43% of the 10,304 referred DACL were potential donors in a 2-year period. Thus, around 1000 BDs per year are missing in Italy. Significant clinical factors for lost BDs may be older age and timing of death. As DACL represent the global donation potentiality (possible donors), we suggest the use of a new indicator—DACL in ICU per million population—and careful analyses of differences in DACL per million people among regions. In conclusion, since striking deviations from the expected ratio between BD declarations and deaths with an acute cerebral lesion exist in some regions, targeted training and support to ICUs should be planned. As adequate neurointensive treatment can improve outcomes and reduce “silent” BDs, more organ donors may exist where patients with acute cerebral lesion are better treated.